The hero badge goes to the Police Administrators in London who bowed to political pressure at the expense of public safety. 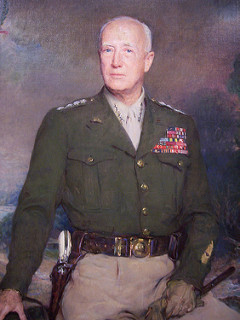 Don’t tell people how to do things, tell them what to do and let them surprise you with their results. George S Patton

If you tell people where to go, but not how to get there, you’ll be amazed at the results. George S. Patton

Several weeks ago I was looking for a quote from General George S. Patton, a WWII General of high renown. I found what I wanted and went about my rat killing. There were two other quotes (above) that seemed to supplement one another and illustrated, to me, lessons modern society has lost.  Because Patton’s observations are no longer put into practice, a third quote comes into play. ‘Those who don’t know history are doomed to repeat it.’— Edmund Burke.

I am going to stick with what I know, and that is law enforcement, which is convenient since the failure of English law enforcement this past weekend is what got me thinking. When I began working as a police officer, my department did not have a policy manual. The Chief’s attitude was, ‘Why would you want one? The Texas Penal Code outlines the law, the Code of Criminal Procedure tells you what your authority is and how to assert that authority, and the Evidence Code describes what evidence is and how to make it admissible. A policy manual is a double barrier, it gives marginal officers something to hide behind and limits the ability of high performing officers to do their job.’

Times were a changing, and pretty soon policy manuals for police departments were the norm. At first, they followed Patton’s dictates.  Policy was directed towards desired outcomes, the manner and route were left to the officer. But policy evolved, officers were not taking advantage of innovations that they didn’t know they needed. So policy went from what to achieve to how to achieve it. This shift to process as a measure meant that achieving the result could be positive or negative depending on the desired bureaucratic outcome. In some cases hitting all the check boxes along the way was more important than achieving the desired outcome.

After one “all hands” meeting where we were given yet another revised policy manual, one of my coworkers made an observation. It all sounds good, might even work as a guide, but I can’t help feeling that if they (the administration) got it right, it was for all the wrong reasons.

Apply Patton’s philosophy to the situation faced by  British police. Homegrown Jihadis using low-tech means hit and run vehicles, knives, and possibly homemade bombs. They were expected to target venues that attracted scores of pedestrians. A significant police presence, without the capacity for violent intervention, would not deter the Jihadis. They are not intimidated by arrest and may even expect to die. Here is what I come up with had I been planning this operation, in one line. In the event of an incident, within a previously identified “high risk” area deadly force will be met with deadly force within one minute, outside a defined “high risk” area within three minutes.

To address this, the British Police have the most extensive CCTV system in the world. The Metropolitan Police, Scotland Yard, and the Army were on call to provide manpower. Traditionally, English police are unarmed. My understanding is police officers fall into three categories. There are “armed response officers,” these officers are always armed and are tasked with responding to all calls where weapons may be involved. They patrol as a three man element, named after a condom, Trojans. The next category is officers who are occasionally armed. These are officers that have the training and certifications to be armed but only carry firearms in specific situations. The third category is the Constables who do not carry firearms but may carry, sticks, mace or tasers.

Then there are the Police Community Support Officers (PCSO), nomination-for-hero-badge-81. They are police officer “lite,” not cops, not civilians, not armed, trained, but untrained compared to their police counterparts. These folks are more PR than police. They wear a similar uniform, and the public doesn’t differentiate between the Constables and PCSO.

So if we ignore Patton’s advice and tailor an operations order to tell our troops how to go about doing things, how would it go in one line? The goal is to reassure the public and members of the force that all the resources of government are devoted to the terrorism issue.

We know that first officers to confront the terrorists were PCSO officers. They may have raised the alarm but couldn’t stop the event. They ran like hell. Why have the PCSOs? It was either a bluff that didn’t work; they look like police or; PCSOs are there for their public relations skills. Seven dead, how’s that PR thing working? Fortunately, a drunken soccer holligan who decided three knife-wielding terrorists against one unarmed holligan was just about right. He didn’t stop them but delayed the terrorists long enough for ARO’s to make the scene.

Look at the pictures from that night. How many photographs are there of four, six, eight armed response officers together? Such a concentration of officers would be great if they were expecting squad action, but everything pointed to one or two man efforts. I’m from Texas, “One Ranger, One Riot.” I suspect the ARO’s always worked as a three man element or a flying squad and common sense was not going to change that. PCSOs always worked large gathering to get the police community relations time. It didn’t matter that the three terrorists weren’t receptive to their spiel. Did the how get in the way of the what during the planning phase?

It took a MacDonald’s mass shooting in San Diego and Columbine High School in Colorado for police executives to learn their lesson. In San Diego the what was to stop an active shooter. One of the first officers o the scene was a SWAT Sniper, equipped with his rifle. The how prevented his acting. The policy required that a supervisor is physically on the site, something that wouldn’t happen for several minutes. The sniper followed policy. In the Columbine, incident deputies exchanged fire with the shooters several times. How indicated that the proper response was to set up a perimeter. A perimeter ensured that the shooters remained undisturbed in the kill zone.

Crazy is doing the same thing over and over and expecting a different result each time.

I shouldn’t make fun of the AROs called Trojans, after all, in my younger days I have followed a Trojan into places I wouldn’t take a SWAT team.