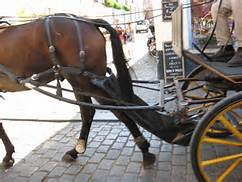 I guess I could be feeling nostalgic, but I don’t find an occasional horse turd as a threat to public health. After all, we made it through a time when the horse was the primary mode of locomotion, and the horse diaper hadn’t been invented. However, the same mentality that concludes buying a Prius is a good idea, demands zero emissions from all modes of transportation. Apparently, there is an ordinance in place that requires that horse turds never hit the street. Since horses don’t understand physics and the concept of gravity; the onus from the anus falls on the rider. Needless to say, the Amish locked in the 18th Century failed to grasp this politically correct concept. They rightfully refuse to cater to the whims of the deluded crowd. Now they are going to court: Trial-set-for-Amish-over-horse-poop-catching-bag.

The defendants are claiming that the ordinance requiring them to clean up roadside deposits is a violation of their First Amendment rights, the freedom to practice their religion.

I have a solution that stops short of court action but may accommodate the needs of both factions. I suspect that part of the Amish objection to picking up horse turds is that they already have more than enough. Between mucking out the stables, cleaning the chicken house and looking after the cattle the average Amish farm probably have mounds of manure, far in excess of their needs. A turd on the side of the road is just one more they don’t have to pick up.

On the other hand, you have all this yuppie scum that has moved out to the farm country hoping it will never change; after they implement several changes to reflect their sensitivities. I suspect that organic gardening, back to mother nature, and eating healthy are a priority. Miracle Grow is out, and replacement options cost an arm and a leg.

Here is an opportunity for the Amish to infuse a little cash into their farming operation. I guess that there is a merchant that caters to the Amish community and the “English” community. All the Amish have to do is bag up the excess manure from the farm and sell it to the English as organic fertilizer. What could be fairer, the English have been giving the Amish shit about their lifestyle, here is a chance to repay the favor, with shit.

Once the English realize the worth of horse shit, those roadside deposits will assume a value. I can see it now, soccer moms with yellow garden gloves stopped on the side of the road, scooping up horseshit. Can you hear the conversation at dinner that night? “Dear I saved three dollars today, I followed Elder Zinder and scored on Maple Road when one of the horses pooped.” What could be more modern, getting something for nothing at the expense of your neighbor?

As to the cops, they can go back to answering important stuff like little Johnny drawing a picture of a gun.