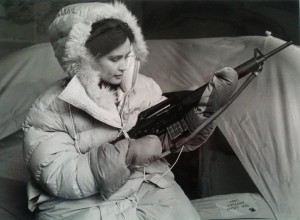 In 1958, a 16″ barreled AR-10 was developed in response to a request by KLM Airlines for a carbine that could be issued to their crew for transpolar flights as part of an Arctic survival kit, and approximately 30 carbines were eventually produced.

A member of a trans-arctic flight crew checks the Arctic gear and the Armalite AR10. It was standard issue to KLM airline crews flying the polar route.  The AR 10 was standard survival gear to defend against polar bears not unruly passengers.  How times have changed.