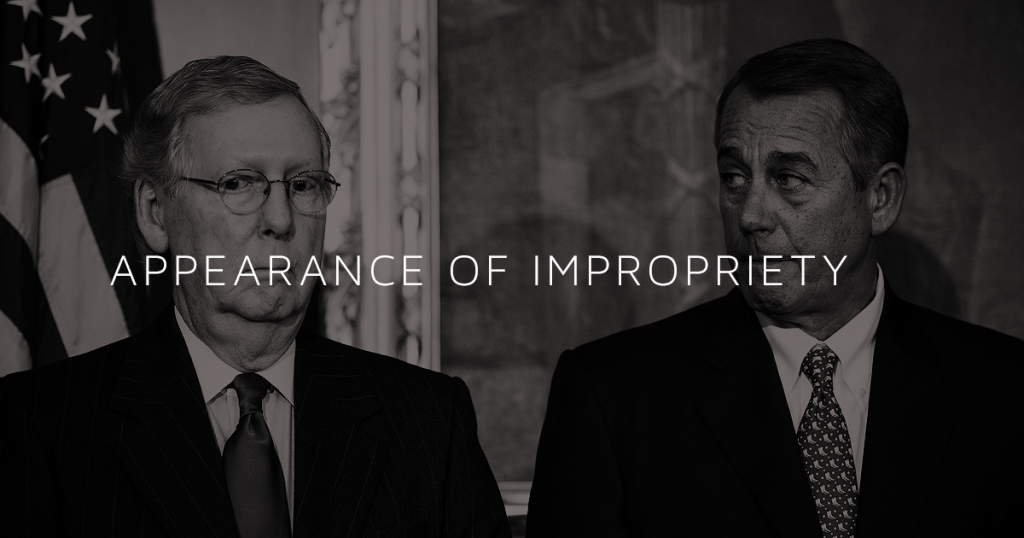 John Boehner and Mitch McConnell are not happy with Republicans.  Boehner says Republican rabble rousers are undermining the process and therefore limiting the effectiveness of the party.

To be sure there is a process to getting things done in Congress and there is a process to not getting things done. Boehner and McConnell seem to forget that one gets legislation passed regardless of party when the rightness of a particular idea overcomes party divisions.  If one party refuses to compromise a stalemate results.  A stalemate is part of the process of legislating it is a feature, not a bug. A process that produces failure and delay is called a failed process.  A finished product is a mark of successful process. There is a third type of process and that is when the agenda of both parties of congress is so lame even the hacks cannot sell it with a straight face.

To enter into a competition whether it’s touch football or politics with the ultimate goal not to get beat too bad, means your side has already lost.  There is a tendency in Washington D.C. to believe it is the center of all things government.  Take a more realistic view, Washington D.C. is a failure as a major American city and if Congress is any indication, an intellectual and moral wasteland. The allegations against Planned Parenthood are criminal in nature and involved crimes committed in various states.  It would seem that in order to prove a Federal nexus, “improper abortion procedure” one must first prove an improper procedure was performed. A substantiated charge of murder would meet that requirement.

The press would have it otherwise, but a news story does not an indictment make.  It is the local prosecutor who has the power to subpoena and issue search warrants that can provide underlying records to either support or refute the allegations.

As to whether or not Planned Parenthood acted properly is moot at this point. As the liberals are so fond of pointing out when drunken Republicans are caught in the their latest folly. “This cannot pass, we have the appearance of impropriety that must first be resolved.

“Liberal commentators and politicians have made a point to indicate that they have not investigated the allegations and in the next sentence conclude the allegations have no merit.  There may be some fascist nations where this investigative methodology works, but not here.  With “Fast and Furious”, “Benghazi”, and “Hillary’s State Department E-mails” liberal assurances don’t have stack up against an impartial investigation.  Friends and foes of Planned Parenthood and the organization itself should welcome an investigation to resolve the charges.

There seem to be indications from the videos targeting Planned Parenthood, that in certain specifically described instances a criminal homicide may have occurred.  The producers have made their outcry, it is up to the local prosecutors to investigate the allegations.  The allegations must be either proven or disproven before Congress can commit to continued funding.  This appearance of impropriety must be resolved.  If Planned Parenthood has been slandered then it must be established so that false accusers can be dealt with.  If, on the other hand, murders were committed through misguided individuals acting on Planned Parenthood’s behalf, then those people need to be prosecuted and safeguards instituted to ensure future funding is applied properly.

The Democrats and mainstream Republicans want someone that they can work with.  The Tea Party Republicans want the Congress to assert its power and not be a door mat for the current administration. The whole point of running Boehner off was change the way the Republican Congress is doing business.  They promised a change and won the Congress and then went back to their old loser ways.  The reality is that the way the system works the most rabid Tea Partier is only going to be as good as the majority he or she commands.