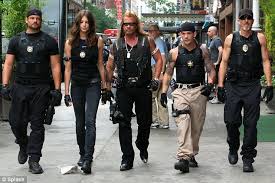 Craig Bannister worries in his blog that Climate Change skeptics will be targeted for gun confiscation.  Two can play that game.

I applaud President Obama’s latest foray into gun control and feel sure that he will ensure that it is applied equally, to all. Finally there is a way to keep guns out of the hands of the mentally ill.  Equipping mental health professionals, social security bureaucrats and other assorted paper shufflers will certainly clarify things and give them the tools they need to render judgment on the rest of us.

I wanted to bring to the reader’s attention a seldom used section of the United States Code (USC) Title 18, 922 (g)(h) that states:

(g)It shall be unlawful for any person—

(6) who has been discharged from the Armed Forces under dishonorable conditions;

(7) who, having been a citizen of the United States, has renounced his citizenship;

(8) who is subject to a court order that—

(C) (i) includes a finding that such person represents a credible threat to the physical safety of such intimate partner or child; or

(ii) by its terms explicitly prohibits the use, attempted use, or threatened use of physical force against such intimate partner or child that would reasonably be expected to cause bodily injury; or

(h) It shall be unlawful for any individual, who to that individual’s knowledge and while being employed for any person described in any paragraph of subsection (g) of this section, in the course of such employment—

Big deal, you know how to cut and paste. Pay attention this could have been written for Obama, in fact I am going to start calling it the Obama Clause 922(G)(H).  It’s a two parter.

Part One says that if a person meets any of the criteria identified in 1 through 9 then they cannot possess a firearm.  Let’s just hit the high points as they apply to “The One”:

who is an unlawful user of or addicted to any controlled substance (as defined in section 102 of the Controlled Substances Act (21 U.S.C. 802));  The One’s self admitted use of cocaine and marijuana coupled with a refusal to release medical records may make this provision applicable.

who, having been a citizen of the United States, has renounced his citizenship; I have never been a “birther”. However, I think it likely that as a young man “The One” took positive steps to renounce his American citizenship. BJ Bill Clinton tried it at Oxford, but because it required knowledge of lawyer stuff he screwed it up. I think Obama got it right and effectively renounced his citizenship. Proof would be found in his college records and state department file, if they were even made available.

who has been adjudicated as a mental defective or who has been committed to a mental institution; I am aware of at least one licensed mental health professional who has diagnosed Obama with Narcissistic personality disorder.  It is classified as a mental illness.  So under 922(g) we can take his guns away, but he gets to keep his nukes.

So you’re saying big deal, if you are right, he can’t have what he doesn’t want.  But it is a two parter, (H) says if (G) applies then the prohibition trickles down to the hired help.  If Obama cannot legally possess a firearm, neither can his protective detail.

This could mean a substantial saving on the Presidential budget.  Fire the Secret Service.Instead the government can hire Dwayne “The Dog” Chapman and family.  Dwayne knows his way around a Texas prison and so accomplishes all his daring do with pepper spray and paintball guns.  Residuals and royalties will further offset expenses.  Two frauds running around the country and engaging in zany antics. This hasn’t been done since Tony Curtis and Sidney Poitier teamed up, it has the making of a hit.  I can see it now “The Deficient Ones” .