I can’t say I have spent much time considering transgender issues.  My experience with the “trans” community has been limited to prostitutes and other bottom feeders.  I used to run across them a lot while on patrol.  I had a Sergeant that I didn’t like, who among other things was a retired Marine.  A transvestite prostitute just did not fit in his universe.

Typically, I would stop the “girls” as they strolled in the roadway hoping for one last trick.  It is a violation of the Texas traffic code for a pedestrian to be in the roadway where a sidewalk is provided.  Rather than write them a ticket, I would fill out a Field Identification Card (FI), check them for warrants and if clear send them on their way.   The process would take ten minutes. Ten minutes with the Sergeant hovering in the background radiating disgust.

I have been around long enough to know you get more flies with honey than vinegar.  Treating a 6’3, 240 pound transvestite like something I just stepped in does not engender a spirit of cooperation.  So if George, the 6’3 transvestite, wants to go by “Honey”, Honey it is.  As long as I get what I want, which is cooperation.  So as I filled out the FI card I would refer to George as Honey, or darling, whatever it took to get the form filled out.  This did not set well with my Sergeant.  One of the last questions on the form was, “What is your occupation?”  Invariably the transvestite du jour would bat his eyes, giggle and say, “you know.”

My reply was always the same, “You ever been in the Marine Corps?”

The “trans” community would have us believe that this confusion is normal and even desirable and that through the miracle of modern medicine he can be she and she can be he.  Yeah, but for that pesky chromosome.  He or she is forever.

I don’t know how they do it.  It appears that selection criteria for gender reassignment surgery is based upon the physician’s desire for a new Mercedes. 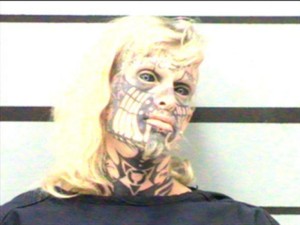 Booking officials then snapped her mugshot, showing Paradox, who has undergone a gender transition, with tattooed eyeballs, several facial tattoos and piercings.

The Smoking Gun reported that Paradox previously worked at the Venice Beach Freakshow eating glass, hanging hooks from her eyelids and laying on a bed made of machetes.

Paradox was released from Lubbock County Jail on Monday, according to online jail records.

Dr. Paul McHugh has stated that (I’m paraphrasing here) That sex reassignment surgery is akin to treating somebody with anorexia nervosa with lap band surgery to aid in weight reduction.  More at the link http://www.wsj.com/articles/paul-mchugh-transgender-surgery-isnt-the-solution-1402615120